The Museum of Horácko and Information centre

The Museum of Horácko in Nové Město na Moravě was founded in 1892 as on of the oldest in Moravia. It has its residence in a former Renaissance town hall from 1555. The current shape dates back to its reconstruction in 1803. Permanent exhibitions are focused on folk culture in the northern part of the Horácko region (Horácko is an ethnographic term and means “hilly area“) and glass-making, the iron and steel industry. There is also a large exhibition of skiing and ski production in the region from the end of 19th centrury up to the present when Nové Město na Moravě has become famous for Cross Country World Cups. In summer season Scary Cellars with tales of Novoměstsko are opened to the public and so is the courtyard with the most attractive exhibit – The Watermill from Vír – a moving figural complex of work and funny scenes., which is driven by a water wheel. The tour of the museum is suitable for visitors of all age groups. For children to play- there is a permanent exposition of the classroom from the First Republic period and enlargements of folk toys. There are also current exhibitions and events (Easter and Christmas market with the traditional crafts and folk art products, opening of the Vír watermill…) going on through all the year. At the box office you can buy traditional hand- crafted products and publications concentrated on local issues.

Expositions of folk culture situated on the ground floor of the museum acquaint visitors with the most typical illustrations of folk culture in the northern part of the Moravian Horácko. The essential part concerns the folk production with accent on the textile production and wood processing. The most interensting exhibits are weaver´s products and woodcavers´ creations as folk toys whose enlarged copies are installed for visitor using.

THE SKI PRODUCTION AND SKIING DEVELOPMENT

The first skis were brought in the Novoměstsko region from Norway in the early 1890s. In 1893 Skating club was established in Nove Město na Moravě. Later it became a Sports club (1910), registered for Union of skiers in the Kingdom of Bohemia and organized the first ski race on 2nd February 1910. 1934 was an important year for local sports, since the first year of the Bohemian- Moravian Highlands Golden Ski was held and made our town famous in following years. From 1970s it was organized as a national one and since 1980s it has become a part of Cross Country World Championships. Nowadays Nove Město na Moravě is established as an important organizer of biathlon world races (Biathlon World Championships in 2013). Thanks to the long-time sports tradition, Horácke Museum is one of a few museums in the Czech Republic which has an exposition regarding skiing. At the exhibition there aren´t only models of skis- from the oldest ones, skiers´ equipment in various periods of time, Novoměstsko ski racers´ awards and prizes, but also a part of an old workroom and a so -called ski station.

The sufficiency of wood, resources of raw materials and water energy originated conditions for glass-making and iron and steel industry in the region. Our big collection is excellent mainly for its large glass collection from well-known glassworks in the Highlands – Milovy. Křižánky, Fryšava, Herálec- which were founded in 16th and 17th century. Glass-making expansion lasted until 18th century and after the new recovery in 19th century gradual decline in production came about mainly because of pressure from rival big enterprises. The last glassworks in Novoměstsko terminated before the First World War.

Hamry- the first iron and steel works- are already documented in domain of Nové Město in 15th century, blast furnaces were built in 17th and 18th century. In the second half of 19th century it arrived at the termination of production due to lack of local resources and as a consequence of the technical revolution in iron and steel industry, when wood was substituted for mineral coal. The most important iron and steel works in the region worked in Kadov (17th and 18th century), which held the 2nd place in Moravia for its production volume in the second half of 18th century. Factories produced soft iron for agriculture, crafts, weapons at the war perionds and from 19th century also utility and art cast iron. Up to now it is brought to mind by cast iron crosses in cemeteries and in the landscape.

The classroom from 1930s can be used by all age groups of visitors.

Precincts of the Museum of Horácko are also made up of a courtyard, where in the high season so called the Watermill from Vír- the most interesting exhibit for most visitors is in operation. Its name comes from a watermill which Vincenc Navrátil from Vír constructed for children in the stream by his cottage . From 1940s to 1970s he created with his son´s Adolf´s help a large figural assemblage drawn inspiration from local environment. For movement transfer they used discarded components from a local textile factory where Vincenc Navratil worked as a maintenance man. Its original was given as a present by Stanislav Navratil, Vincenc Navratil´s grandson, to our museum in 1980. The copy installed on the courtyard in 1995 was made by Josef Filip from Velké Meziříčí, a restorer who used original drive components. A water race and a waterman were added to his copy. The mill opening ceremony, which opens the high season, always falls on the first Friday in May. A folklore performance is a part of this celebration. 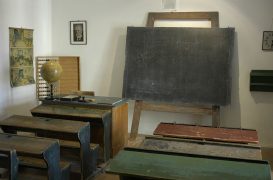 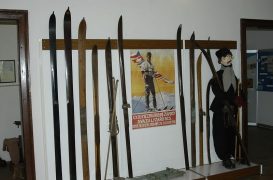 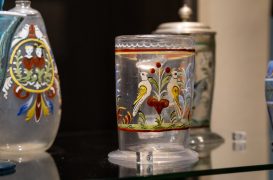 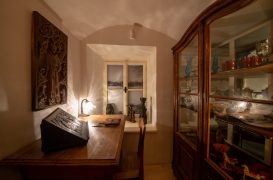 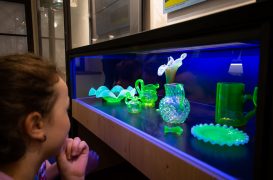 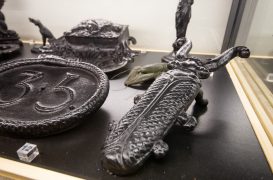 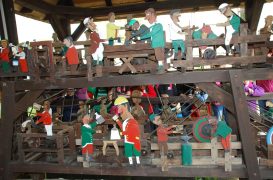 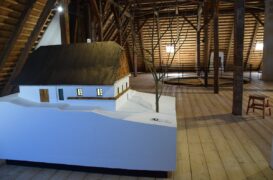 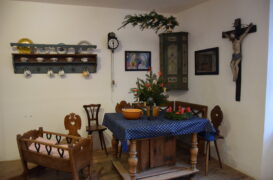 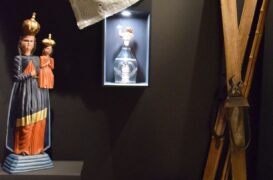